As metioned in an earlier update we are going to need a better MOSFET driver for our oversized linear solenoids used for the bass drum. To help a bit with the violent current changes when the 2.5 A solenoids are actuated, we place two 10,000 uF capacitors in parallel. The MOSFETs are IRL540 logic-level N-channel MOSFETs, ensuring a fully opened channel (0.077 Ω) when activated. The flyback diodes are rated for 3 A, which should more than enough.

Even though we technically only need two drivers, we fitted the module with four in case we’re going to need more in the future. For now, we’ll use the two spare drivers for some LED light effects inside the bass drum. We made a small auxillary module accepting 2 x 12V inputs directly from the MOSFET module. Each channel has three LEDs in parallel, coupled with a 100uF capacitor. 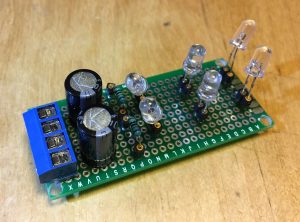 The plan is to have the LEDs light up when the bass drum solenoids actuate, just like we’ve done it in both the tubular bells, the PipeDream organs and several of our other percussion instruments. There we just placed an LED (and resistor) over the solenoid, making the LED light up as long as the solenoid is actuating, which is usually only about 10-30 milliseconds.

However, we are going to take advantage of the separate driver channels to make a bit of effect here. The 100uF capacitor makes the LEDs light up instantly, but fade away over somewhere between 0.5 and 1 second, instead of the short blinks of only a few tens of milliseconds.

The bass drum is actually just an open-backed bodhrán, so we are going to hide the driver module and the LED module behind the drum. Placing the LEDs in there as well, lets us illuminate the drum vellum from the inside.

The bass drum itself is also under construction. As shown on the image, it’s based on actual bass drum pedals, though from a childres drum kit. They were cheap, okay?

However, we’ve removed the pedals, replaced the expansion springs and replaced the mallet arms with a longer steel rod. Mounts for the solenoids has been more or less designed, but not yet built (or tested).

This site uses Akismet to reduce spam. Learn how your comment data is processed.